By Harpreet
|
In guangdong , Pork
|
On May 29, 2016
What is Sweet and sour pork? The Guangdong province is the birthplace of the famous Chinese classic sweet and sour pork(糖醋里脊). It is also in this country sometimes under the English translation "Sweet and Sour Pork" known, but is always prepared on the same principle: Pork...
Continue Reading

[alert-note]Beef Broccoli is a traditional dish that you are almost sure to find in Chinese restaurants or at family meal in China. This dish is very rich in protein and. 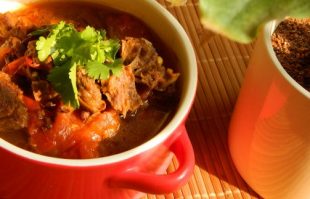 By Harpreet
|
In Poultry
|
On May 8, 2016
What is General Tso's Chicken? General Tso's chicken is a sweet, slightly spicy, fried chicken, which is served in the vernacular in American Chinese restaurants. The dish is most often considered Hunanese court, although it. In China and other countries home to the Chinese diaspora...
Continue Reading
This div height required for enabling the sticky sidebar